Nigella sativa, also known as black seed or black cumin, has been used as traditional medicine for centuries.

The Bible mentions Nigella sativa as “the curative black cumin”, and the prophet Mohammed described it as a plant with amazing healing powers. Nigella sativa is a bisexual plant that grows mainly in the Middle East, in southern Europe and northern Africa. The oil extracted from its seeds is effective against many diseases such as cancer, cardiovascular, kidney diseases, diabetes, asthma etc. Numerous studies have shown that nigella sativa and its most active compound thymoquinone (TQ) can protect the body against the deleterious effects of chemotherapy and radiation. 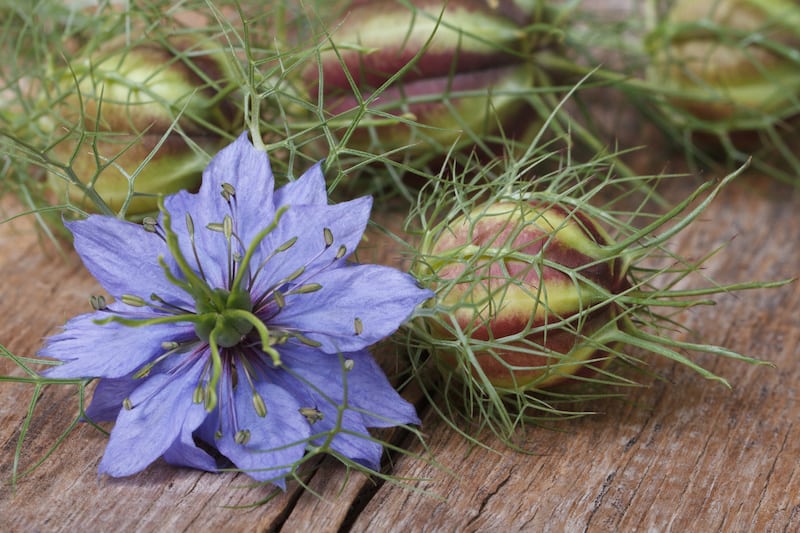 Only recently nigella sativa has been found to possess remarkable beneficial properties to induce mechanism of apoptosis in cancer cells. This is a new therapeutic approach in the treatment of cancer. Apoptosis is known as programmed cell death in all cells. It is the normal natural process that enables defunctionalized cells to get replenished by new ones. Cancer cell growth is quite the opposite, pathological process. Cells don’t die. They proliferate and become “immortal”, acquiring new and abnormal blood supply.
Thymoquinone triggers apoptotic cell death in human cancer cells., Nigella sativa oil, beside thymoquinone (up to 50%) contains thymoquinone, crystalline nigellone, beta sitosterol, myristic and palmitic acid, stearic acid, palmitoleic acid, oleic acid, linoleic acid, arachidonic acid, proteins and vitamins, especially vitamin B1, B2 and B3. Nigella sativa seeds also contain calcium, folic acid, iron, copper, zinc and phosphorous.
Researchers at the Cancer Immuno-Biology Laboratory in South Carolina also found that Nigella sativa (black cumin) helps stimulate the activity of neutrophil granulocytes which are the most abundant type of white blood cell in the body. These neutrophils kill cancer cells before they multiply and help eliminate them before they can develop into harmful tumours.

including the “deadliest” form of cancer – pancreatic cancer which is the fourth leading cause of cancer deaths in America with the survival rate after five years of conventional cancer treatment of only 4%. A study conducted at Kimmel Cancer Centre (Thomas Jefferson University), Philadelphia revealed that Nigella Sativa (black cumin) DESTROYED pancreatic cancer cells with an incredible 80% rate of cancer tumour cell death! It also stopped the gene transcription process so the cancer cells could not replicate.
The most promising research has been done connecting Nigella sativa to multi-drug resistant bacteria. This is an enormous problem today because these so-called “superbugs” are becoming a significant public health risk. Strains of bacteria that are antimicrobial-resistant and viruses are becoming impossible to treat. These resistant to antibiotics “superbugs” include HIV, influenza, Staphylococcus aureus, tuberculosis, gonorrhoea, candida, malaria and other dangerous pathogens. According to the study, the oil of black cumin killed 97 out of 144 strains tested, most of which were resistant to antibiotics.
Nigella sativa oil decreases the incidence of side effects in people with cancer who are on chemotherapy. Additionally, black cumin oil has been shown to be protective of neurological diseases such as Alzheimer’s disease, depression, epilepsy, Parkinson’s disease, and traumatic brain injury. Thymoquinone in Nigella sativa seeds also has a protective effect on the heart, promotes healthy cholesterol levels and helps normalize blood pressure.
The Journal of Diabetes and Metabolic Disorders published a study which discovered that black seed oil that has anti-obesity properties and is among the most effective natural remedies on the planet.
Nigella sativa has been studied against a variety of different cancers and found to be effective against cancer in the blood system, lung, kidney, liver, prostate, breast, cervix, skin and others.
Black seed oil has been approved by The Federal Drug Administration (FDA) as generally recognized as safe (GRAS). Mice studies have not shown any significant side effects of black seed oil, even at relatively high doses.
Most naturopaths and health experts recommend taking 1 teaspoon of the oil 2 times per day for treatment effects. Oil is consumed on an empty stomach/before meals and bedtime. For a healthy maintenance dose or as a preventative measure oil can be taken once per day.
Make sure that you purchase organic, pure-pressed oil that is completely free of all additives and is sold in a light-protective and air-sealed dark glass bottles.
Currently, Coyote Herbs is one of best suppliers of pure Black Seed Oil that meets these standards.